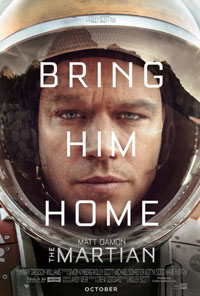 "The movie is never as good as the book."
Actually... not never.
The Martian just cleared that bar.
And in an even more amazing, and seemingly impossible twist on that thing everybody knows, not only is The Martian movie as good as The Martian book, The Martian movie is as good a movie as The Martian book is a book.
I realize that sentence is hard to parse. Maybe go back and re-read it? I've spent 30 minutes on that sentence, trying to communicate that thought but I need to get on with the rest of this post.
Put another way: I declared that The Martian (novel) was the best hard science fiction novel I had ever read. It is not a perfect book, but it is an outstanding book that does "book things" brilliantly. 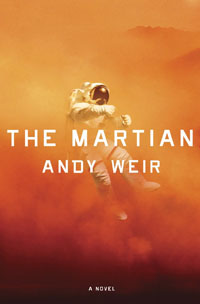 I'm now declaring that The Martian, (movie) is the best hard science fiction movie I have ever seen. It is not a perfect film, but it is an outstanding film that speaks the way only a film can, and uses the medium in ways that the very best films do.
High praise, I know.
I've never seen book-to-film translation work this well before. I thought it was impossible, frankly. Now I know that it can be done, and I look at it and wish I'd been a part of it. The Martian is a magnificent achievement, and I have to content myself with watching it and gushing over it.
If you haven't read the book, it's a great book. Go read it! Do you want to see the movie first? Go! See the movie! It will not undermine your enjoyment of the book. Sure, whichever one you consume first will provide spoilers, but that doesn't really matter.
Now, back to that "best" claim I made...
We could argue definitions forever. What distinguishes hard science fiction from regular fiction set in believable near-future technological settings? Down that road you'll find only a forest of nitpicks and misery and not much movie-enjoying. When I say The Martian is the best hard SF movie ever, I'm stacking it up against films like Gravity, Interstellar, 2001: A Space Odyssey, and Moon. There are a number of techno-thrillers that also qualify, including this year's Ex Machina, and last year's Transcendence.
The Martian is a better hard SF movie than all of those.
2001: A Space Odyssey is a more important movie, and carries a lot of weight, but have you watched it recently? I love the thought of that movie, but can't sit through it.
Gravity is a more daring movie, arguably more artistic for its use of a tiny cast and lots of silence. To my mind it's the closest contender, but the power of The Martian's ensemble cast puts it over the top.
Insterstellar doesn't come close. Cool moments, and I liked what it tried to do, but ultimately it was a preachy time travel paradox story, and as pretty as it was, it lost my interest by the end.
Moon? Powerful, and thought provoking, along with Transcendence and Ex Machina. The Martian says nothing about identity or singularity, but what it says about knowing science to survive speaks louder, at least to me, than the cautionary tales do.
I don't often put this kind of stake in the ground. I'm sure more experienced film critics, students of cinema, and assorted experts by other names will argue convincingly against its placement. I suspect, however, that those experts will better serve their fields by dissecting The Martian in an attempt to determine how great books can be turned into great movies going forward. "Best" is hard to quantify. Answering the question "why did this movie work so well?" is easy, by comparison, and more important to address.
The Martian enters my 2015 rankings at #1, and when I look at the line-up for the rest of the year I'm pretty confident that it will keep that spot.
(cross-posted from howardtayler.com)
(ADDENDUM: Sandra and I saw  The Martian in 3D. It was stunningly beautiful. There were a couple of moments where the 3D render was weird, but Sandra didn't notice them. I wear progressive lenses, so it's possible the issue really was just me.)