Brandon Sanderson handed me the Advance Reader Copy of   The Way of Kings , and my first thought was that maybe they were doing ARCs in large-print editions only. My second thought was one of humble gratitude. I'm glad to have Brandon as a friend, yes, but I'm also very fortunate to be strong enough to lift this book. 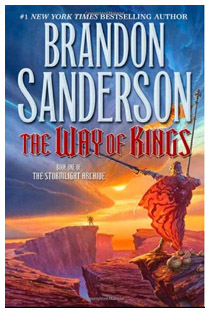 I read the first line of the prologue and was instantly hooked. I am going to bypass the actual review and cut straight to the pithy conclusions that humorists like to believe they are paid to jump to. 1) This 1000-page tome is the best argument you'll have all year to get an e-reader, because you HAVE to have this book, but you might not be muscular enough to carry it around. I've been working out, so I'm okay. 2) If Brandon were my arch-nemesis,  I would despair of ever stopping his rise to ultimate power, and then I would seek to become a minion. The Way of Kings is a work of such force that those who hate Brandon will be compelled to love him, and those who already love him will begin spontaneously giving birth to his children. 3) I briefly considered cancelling my trip to Australia just so I could attend the midnight launch party for this book. When literary historians declare August 31st, 2010 as the beginning of the Sandersonian Era I want to be able to say that I was at ground zero. I'm good with Photoshop, so I think I can fake it. 4) When Brandon practiced the book pitch on me back in 2008 I thought it was kind of small, and maybe not compelling enough. Today I realize that the difference between the book pitch and this book is like the difference between an acorn and a space elevator. The Way of Kings, by Brandon Sanderson, is available for pre-order now, and hits the streets on Tuesday, August 31st, 2010. I cannot recommend it strongly enough.