I ducked out of the LDS Storymakers conference this evening for a showing of Thor. I chose to see it in IMAX 3D because that was the only showing that fit my schedule. 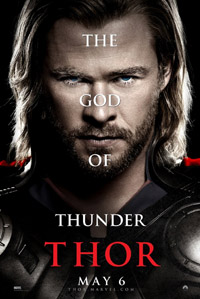 If I had it to do over I would wait until Monday, and then see the film in flat-screen 2D. Oh, and I'd probably sit in the back of the theater just to be safe.

IMAX 3D is intense. You have to crouch all the way in the back to not feel completely surrounded by picture. This is probably great for slow-moving nature documentaries about the Grand Canyon, but it's a real eyeball-pummeler for an action movie.

I was in the fourth row, almost dead-center.

Had I not been struggling to comprehend the overwhelming amount of visual data the IMAX theater blasted onto my poor retinas I would have enjoyed myself quite a bit more. As it stands, Thor comes in just below Paul on my scale of "how much fun did I have in the theater." The problems were usually the battle sequences, which is sad because the promise of those sequences is what drew me into the theater in the first place. In IMAX 3D my thoughts ran along the lines of "oh no please don't start fighting again..."

(Note: It's not uncommon for me to go to the movies to escape just that sort of thinking around my kids.)

Visual assaults aside, the movie seemed short to me. I guess I was hoping for an Act III fake-out like the one in The Dark Knight, where almost everything has been resolved and then suddenly everything turns upside down and our heroes are in serious trouble. That would have resulted in a very meaty Thor.

As it stands, Thor is short and snack-ish. I did love the portrayal of Loki and the character arc for our Mjolnir-wielding protagonist. Loki in particular was very convincing as a first-rate trickster. The writing was solid, the acting was spot-on, and the plotting was about as tangled as you can hope for in a comic-book movie. I liked it.

I just wish my occipital lobe would stop thrumming.