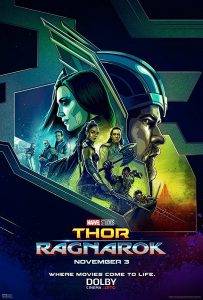 I have a new favorite Marvel Movie.

Thor: Ragnarok was amazing fun. It cleared my Threshold of Awesome, it nabbed my top spot for 2017, and yeah, I saw it twice within 14 hours. I’m looking forward to picking up the Blu-Ray as soon as it’s available.

It’s kind of cool, really. Certain key-frame scenes don’t happen the way the trailer plays them out, preventing spoilers. In some cases the background is different. In others the costuming and incidental make-up is different. And in still others the scene doesn’t actually happen with those people in it.

I’ll give you a low-impact example:

In this still from the trailer the background  looks kind of urban—perhaps it’s an alley? In the actual film, however, this is not the setting for the action in question, so when the event happens in the film, we’re not expecting it. We’re not in that alley we remember seeing in the trailer.

I like this practice a lot. I want trailers to give me a sense of how the movie is going to make me feel, but I don’t want any of the big reveals.

Okay, yes, I suppose the bit about Cate Blanchett’s character catching Mjolnir is a big reveal, and if you haven’t actually seen any of the trailers I suppose I should apologize for posting this snippet, because now it’s out there, but hey, maybe it’s not the REAL Mjolnir, or maybe it’s a dream sequence. Am I off the hook now?