Once we're done scrolling past a neat, toy-soldiers-on-map version of Europe, The Three Musketeers gives us a steampunk scuba diver emerging from the canals of Venice with repeating crossbows. 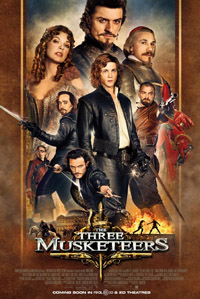 Okay, so it's going to be THAT kind of movie. I mean, if this is seventeenth-century Italy we can't even call the scuba rig "steampunk" because there aren't any steam engines yet.

Well, at least your expectations have been set. It's going to be THAT kind of movie. This isn't historical fiction by a long shot. It misses the romanticized historical mark by a wide margin as well. What you've got here is full-on, brass-balls to the clockwork-secret-passage-wall alternate history. And if you can make it past the waterproof repeating crossbows, you're in for a real ride.

I had a great time. My 16-year-old daughter had an even better time. This movie comes in at #7 for me this year.

If you're a fan of the Disney version, you're going to need to let go of some things. Oliver Platt, Keifer Sutherland, Tim Curry, and Rebecca De Mornay are not here. If you spend the film in comparison you'll surely miss some of the fun. Save the deconstruction for afterwards, because you can still have plenty of fun with that later.

I did have some complaints. This movie only has one Orlando Bloom in it, but it needed three, or maybe four. In fact, it looked like at least two of the non-Orlando-Bloom swashbuckling, slender, dark-haired men were trying really hard to BE Orlando Bloom -- weird, since he's already in the movie.

Also, while I'll grant all sorts of movie-physics in a film like this, I draw the (invisible) line at pre-Victorian era monofilament razor-wire. I'm sorry, movie. You can have clockwork catburgling cable-rigs, flamethrowers, and rotary gun emplacements, but not monofilaments.