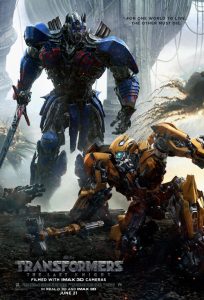 Transformers: The Last Knight was a waste of some pretty cool robot fight choreography, and an absolute squandering of Anthony Hopkins and Isabela Moner.

This doesn’t surprise me, given the track record of this less-than-meets-the-eye cinematic franchise, but I was still disappointed.

The plot is far too convoluted for a straightforward McGuffin match-up¹. There were three times more speaking-role characters than the average audience member (myself included) is likely to have emotional space to care about. Making the film longer (2 hours 28 minutes) doesn’t solve the problem. It means we’ll all be tired, exhaustedly awaiting the end of the movie about 38 minutes before it shows up.

Fortunately, the actors all turned in solid performances, especially Isabela Moner, who was one of the very best things about the film. Sadly,  she’s completely absent for Act II, but when she does return in Act III she masterfully acts far above the hackneyed plotonium the writers deployed to work her into the climactic battle.

My biggest complaint lies with the mythos. Tying the Transformers into Arthurian legend may have seemed cool and clever at some point, but it fell completely flat for me². Stanley Tucci played Merlin quite well in the prologue, doing an outstanding job with “drunken charlatan thrust into the wrong movie” but the humor said to me “this is going to be bleak, so let’s loosen you up with some laughs. Here, have an inebriated wizard!”

I said earlier that the robot fight choreography was good. It was! Bumblebee’s entrance was pretty epic, and although I couldn’t always keep track of which Transformer was which, I was able to see what they were doing, and on several occasions they did cool things. Somebody told Michael Bay to hold the camera steady, I suppose.

Transformers: The Last Knight is the first film this year to cross my Threshold of Disappointment. I feel bad for the many people responsible for the good parts of this movie, because they deserve to have those parts show up in a less disappointing film³.

¹ “McGuffin match-up” is what I call it when the characters have to find multiple important plot-thingies (‘McGuffins’) and put them into the hands of the right people in time to save the day.
² “Secret history” stories often fall flat for me, usually when they take great moments in human history and tell me it was actually aliens, or when they take human atrocities and tell me the terrible people were all vampires. Actual heroes and villains from history need to remain human. That’s how actual humans learn to be heroes.
³ I also feel bad for the boy who, as the crowds were exiting the theater, was telling everyone within earshot that this movie was awesome. To my long-time-parent ears his tone suggested that his opinion of the film’s awesomeness was actually kind of shaky, but he couldn’t bear the thought of not having seen a good movie. Nobody jumped in to validate him, but neither did anyone smack him down. I guess we all chose the kindness of silence, tacitly agreeing to let him find his own way through dawning disappointment.