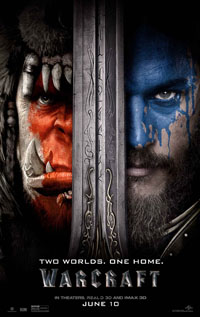 I have a lot to say about this film, in large measure because it did some surprising things, and it did some difficult things, and almost everything it did was done well. That stuff merits discussion.

It’s worth holding off on a lot of it, however, because there would be spoilers, and one of the things I loved most about this film was that it surprised me several times. There were a couple of plot points that I called well in advance—tropes that have too much narrative force to be denied, even in subversion—but that didn’t sully my satisfaction with the story.

Let’s start with this: Warcraft clears my Threshold of Awesome, and if I lose geek cred, or a measure of one of the other credibilities I enjoy, by having had more fun watching Warcraft than I had watching this year’s superhero films, so be it. You can read the rankings for yourself. As of this writing the furries are winning at movie (Kung Fu Panda 3, Zootopia), and video games are runnering up (Angry Birds, Warcraft, Ratchet & Clank.) Superheroes are making a good show of it, but through a combination of retreads, joyless slogs, and shaky-cam, they’re the ones losing geek cred.

My biggest concern with Warcraft, at least going in, was how the trailers suggested that female orcs would be depicted as green-skinned, sexy humans with cute, pouty tusks, while the males were big and scary. That attractive lady-orc in the trailers (played by Paula Patton) is not really an orc. The orcs consider her an abomination, and I’m not spoiling much, because we get that reveal the moment she shows up on screen. The actual female orcs are still kind of built like humans, of course, but those lady-orcs most resemble human males on a solid regimen of steroids and gym memberships. With not-as-cute-but-still-pouty tusks.

And my point here is that the creature design made sense, and kept me rooted in the story. On top of that, the orc characters were so very well rendered that I simply accepted them as people, rather than CG, was able to let them get on with their movie.

I very much liked how magic was used in the story. I have no idea what the current rule set is for magic use in the World of Warcraft game (I haven’t visited Azeroth since Warcraft II¹) so I can’t speak to whether the film was true to the game’s rules. It was, however, true to the rule set for good storytelling. There were limits to it, there was a cost, and as its secrets were peeled back there were story-critical reveals that were heaps of fun.

World of Warcraft players will probably catch dozens of nods, cameos, and Easter eggs. They might also rage-quit over the mistreatment of their favorite whatever. None of that had any bearing on my enjoyment of the films. I caught a couple references, and liked them a lot, but they worked fine without context, too.

And I guess that’s what amazed me the most about this film. It does not assume that we have any knowledge of the universe². Characters are introduced and developed from scratch, and there were a lot of them to keep track of.

¹Warcraft II: Beyond the Dark Portal, which was released in 1996, and which I may have noodled around in as recently³ as 2005. No, I have not played WoW.

²Well, almost none. From the outset it looks like most other Tolkien-derived western fantasy settings: “monsters and magic in Medieval Europe.” There’s far more than just that going on in epic fantasy these days, which is part of why reading new books is so cool.

³So, not very recently. Eleven years.