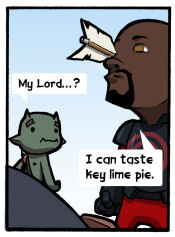 Before I tell you how much I love Rob Balder's new comic Erfworld (illustrated by Jamie Noguchi) I need to explain to you why Rich Burlew's The Order of the Stick is so wildly successful.

If you're a role-player and you haven't heard of The Order of the Stick it is likely that you've been rolling those bones in a cave somewhere. Rich tapped into the collective subconscious of role-players so effectively that players have begun citing D20 v3.5 rules and using Rich's comics to prove their points.

On to Erfworld... Rob Balder wrote a song a while back called "Rich Fantasy Lives" (available on his CD) that proved to me once and for all that Rob gets it. Rob understands why fantasy gamers game, whether they're role-playing, LARPing, or marching armies across tabletops. (His long-running comic Partially Clips does not exploit this understanding, however. It's funny and wonderful for other reasons.)

Erfworld seems, then, to be a very loving send-up of table-top strategy. And because I'm just starting to get into said genre (thanks to my IK gaming group), I'm right there in the cross-hairs.
If you play Warhammer, or any of the other 28mm-scale tabletop strategy games, you're probably already familiar with Turn Signals on a Land Raider. Erfworld is a different approach to this material, and thanks to Jamie Noguchi it is a visual delight. (I've criminally understated Jamie's contribution -- Erfworld is not just pretty, it is excellent sequential-art storytelling.)

Erfworld is also brand-new. There is sufficient story now to hook you, but not so much that you'll lose more than an hour catching up. And even if you're not a table-top strategy gamer you're likely to enjoy it. The word "croakamancer" and the giant cloth golems alone are worth the trip.