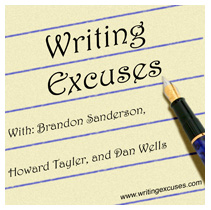 There are two new episodes of Writing Excuses up that I haven't blogged about. The first, Episode 26, talks about the Horror genre about which I know a lot less than Dan Wells does. The second, Episode 27, talks about religion from the standpoint of world-building.

Episodes 28 through 31 were all recorded at WorldCon 66, and I hope they sound okay because our recording area was kind of noisy. We got some great guests for those episodes, including the legendary Phil and Kaja Foglio. Those episodes should go live one per week for the next month.

During that time Brandon, Dan, Jordan (our producer) and I will be looking at possible format changes, new audio equipment, new sponsors, and a new logo... all in the hope of kicking off "Writing Excuses Season Two" with a fresh foot (and no pants.)