After all my rambling on about nostalgia-mining, X-Men: Days of Future Past proved to be a great case-study in how to work nostalgia correctly. And putting aside all the artsy deconstruction stuff, I had a fun at the movie. It clears my Threshold of Awesome. 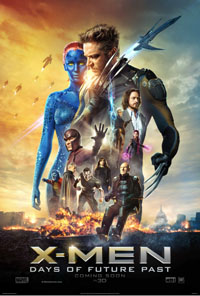 As it happens, "Days of Future Past" is a time-travel story. Who knew? (Answer: everybody who watched the trailers.) With time travel as a plot device, the storyteller can do some neat things, meta-things, like taking the audience back to movie-moments they've experienced before, and making them better than the audience remembered them.

Your mileage may vary, here, depending on how much you liked X-Men (2000), X2 (2003), and X-Men: The Last Stand (2006). Me, I liked the first one, loved the second one, and thought the third one was clumsy in spite of (or maybe because of) the amount of awesome stuff they tried to put into it.

X-Men: Days of Future Past skirts around that trilogy completely, opening with a late-stages apocalypse setting (post-"Last Stand," obviously) and then jumping to the early 70's, about a decade after the events of X-Men: First Class. In the course of doing this, we get to see some of what Logan/Wolverine remembers about the intervening years. And even though that bit was only a tiny part of the overall movie, it served to make the whole thing more powerful by taking all the nostalgia I had for the previous decade's X-Men films and distilling it for a single, concentrated punch.

Of course, if you hated those films and don't want to be reminded of them, that punch may end up working against the directorial vision for this film. Like I said above, YMMV.

X-Men: Days of Future Past comes in at number 5 for me for the year, but pretty much everything above this year's Threshold of Awesome is neck-and-neck, so the numbering feels kind of arbitrary, even to me.