After what happened with the X-Men film franchise in the two previous installments I felt no small amount of anxiety over spending money, let alone time, on a fifth go-round. Perhaps these lowered expectations served me well, because I had a great time in the theater. 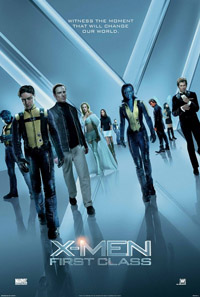 My favorite superhero stories are usually origin stories. Those are where we see the most character development, and where we get to share all the wonder of discovery with the proto-capes on the page or up on the big screen. In that sense X-Men: First Class had a lot going for it, and thankfully the filmmakers took care not to squander it. I enjoyed the whole film, though I felt it did get just a little long at the end.

One important note: comic-book canon (such as can ever be said to exist) is largely ignored. You should probably set aside what you know of the previous X-films, as well as most of what you know about the Cuban Missile Crisis. I don't know if this is a franchise reboot -- Hugh Jackman's cameo suggests they wanted at least SOME continuity, but clearly they weren't about to let the rigorous demands of a proper story bible get in the way of telling a good story.

And they told a good story. This film stands well on its own, and may even stand best on its own. It's my new third-place favorite for the year.