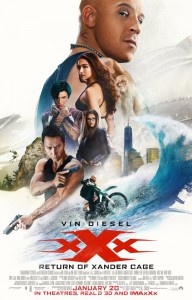 And they did! By the end it really was an ensemble piece, giving plenty of camera time to Donnie Yen, Deepika Padukone, and Ruby Rose¹. It also repented nicely for the Ice Cube installment of the Triple X franchise with some of the smoothest ret-conning² I’ve seen in a while.

¹ I would watch an entire season of TV built around Padukone and Rose being gunslingers, perhaps headlining a full ensemble of ladybro³ wit, wile, and badassery.

² So smooth it might not even be considered a retcon, really. Spy movies can do this well by giving us the “you don’t have the whole story” moments, and it’s not even cheating when they do it right.

³ “Ladybro” is a term I first heard from editor Navah Wolfe, and I might not be using it correctly. I think it means “all X-chromosome buddy-cop-style relationships.” If it doesn’t mean that, then I need a different word that does.