I went in to Zootopia knowing very little about it beyond the fact that it was computer animated “anthro.” 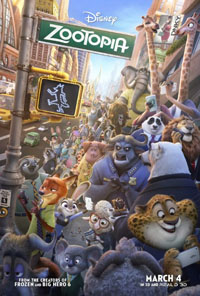 It was delightful. I’ll be buying the Blu-Ray, because this is one of those films I’ll just want to have around the house forever.

I have no idea how the dyed-in-the-wool (pardon-the-pun) furry fans will feel about Zootopia, because I’m not really conversant in their culture. It is possible that furries will see the film as a re-tread of stuff they’ve been consuming, and creating, for decades. Or maybe they’ll find it fresh and wonderful. I don’t know.

Zootopia leaps across my Threshold of Awesome, and sits just under the only other film this year to make that leap, Kung Fu Panda 3. That movie is also anthropomorphic, and I’m not quite sure how I should feel about that, since I only noticed the correlation while writing this paragraph.