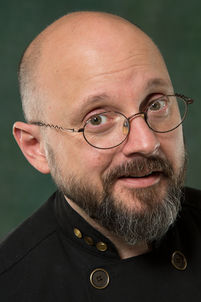 Howard Tayler is the writer and illustrator behind Schlock Mercenary, the Hugo-nominated science fiction comic strip.  His artwork is featured in XDM X-Treme Dungeon Mastery, a role-playing supplement by Tracy and Curtis Hickman, as well as in the board game "Schlock Mercenary: Capital Offensive" by Kevin Nunn, published by Living World Games.

With his friends Mary Robinette Kowal, Brandon Sanderson, and Dan Wells, Howard co-hosts the Hugo and Parsec award-winning “Writing Excuses” podcast, a weekly 'cast for genre-fiction writers. "Fifteen minutes long, because you're in a hurry, and we're not that smart."

New readers may find Schlock Mercenary: Random Access Memorabilia to be a delightful introduction to the work for which Howard is best known.

A recovering autodidact, Howard nevertheless remains a firm believer in the power of focused practice, and in the relative irrelevance of talent. He praises artists' skills, rather than saying "you're so talented," because he knows that their years of study and refinement are what we see on the pages they create.

He lives in Orem, Utah with his wife Sandra, their children, and three archetypally ungrateful cats.