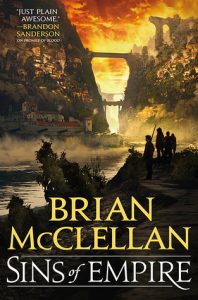 Sins of Empire, by Brian McClellan, is on sale for $2.99, likely as part of a dastardly ploy to lure readers of fine flintlock fantasy into the acquisition of Wrath of Empire when it releases on Tuesday, May 15th¹. The plot is all the more sinister given the likelihood that its victims won’t complain a bit. 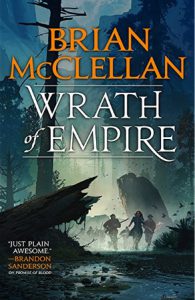 I’ve been a Brian McClellan fan ever since he debuted with Promise of Blood. That was a darn good book, and I gushed over it unashamedly².  He’s gotten better at this novelist thing, however, so Sins of Empire is definitely his best writing. At least to date. I will be completely unsurprised to learn that Wrath of Empire, which I’ve only just begun³, is even better.

¹ By way of public service, the best way to support authors of things you love is to either pre-order their novels, or to purchase them the week they release.
²  In that review I boldly proclaim Brian’s debut to be the best debut I’ve read. Andy Weir’s debut took my top slot just two weeks later.
³ Sometimes I get these things months early as ARCs. Sometimes I get these things a week early because the author dropped by for a chat. Mostly, though, I buy them¹.