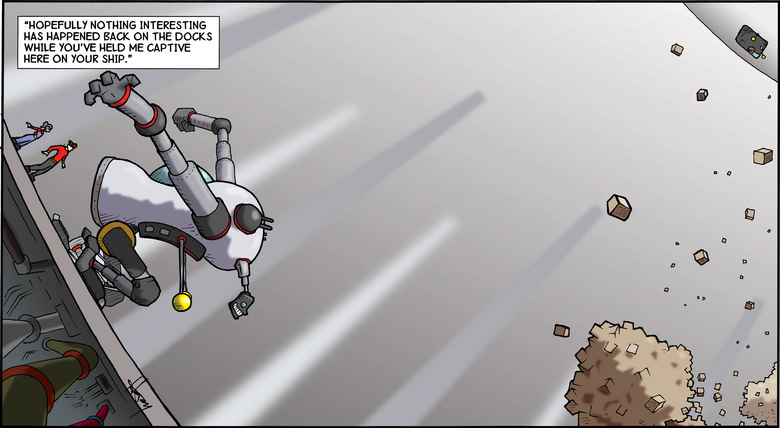 Narrator: Meanwhile, aboard the mercenary warship Touch-And-Go. . .
Frank Hannibal: The Infracrats still hold Stationwaist, but they also still depend on Foodlords and the transit unions.
Captain Tagon: What about the Agriponi-whatists you mentioned? Didn't they make fresh food? Why aren't they more powerful?
Frank Hannibal: The Union of Agriponitulturists was dissolved by Infracrat fiat for price-fixing. When the U.N.S. started shipping food in three years ago, the Portlords put them the rest of the way out of business, and then took their facilities. . .
Frank Hannibal: . . . which no longer see use, because the U.N.S. deliveries have a much, much better profit margin.
Captain Tagon: So the free food we're delivering is actually the problem?
Frank Hannibal: It's not that simple, the Separatists insist that it is, but the system was broken long before Credomar became a charity case for Sol.
Frank Hannibal: And speaking of charity cases, I think this interrogation has gone on long enough. I've told you everything I know about Credomar politics.
Frank Hannibal: Educating you has been tiresome. I need to get back to reporting the news.
Frank Hannibal: "Hopefully nothing interesting has happened back on the docks while you've held me captive here on your ship."