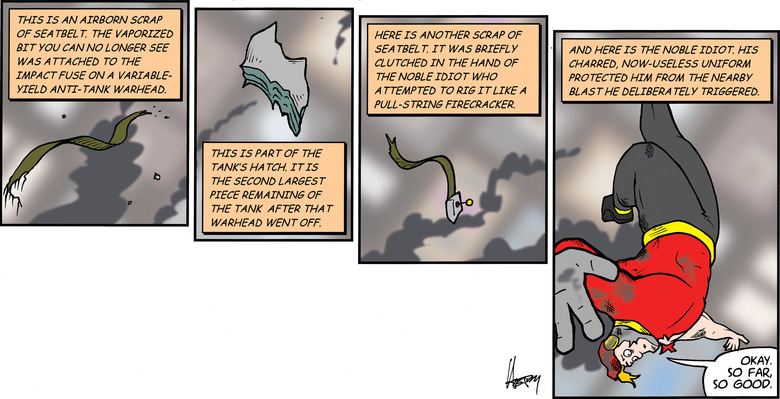 Note: The first-largest remaining piece of Brad's tank is the annie-plant. In the interest of relieving a bit of the tension that has accumulated during the current narrative, let it be known that the annie plant will not crack open on impact, and will not, therefore, release the radioactive cloud created when its supply of neutronium evaporated. It will also land harmlessly in a park, where it will remain until the destruction of the park.
Previous
Next

Narrator: This is an airborne scrap of a seatbelt. The vaporized bit you can no longer see was attached to the impact fuse on a variable-yield anti-tank warhead.
Narrator: This is part of the tank's hatch. It is the second largest piece remaining of the tank after that warhead went off.
Narrator: Here is another scrap of seatbelt. It was briefly clutched in the hand of the noble idiot who attempted to rig it like a pull-string firecracker.
Narrator: And her is the noble idiot. His charred, now-useless uniform protected him from the nearby blast he deliberately triggered.
Brad: Okay, so far, so good.