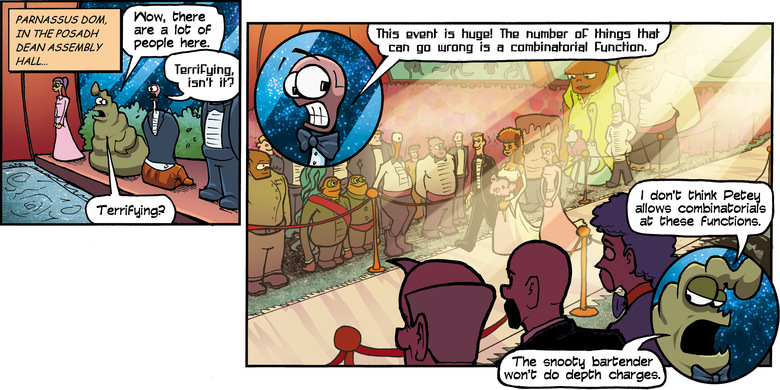 SCHLOCK: Wow, there are a lot of people here.

ENNESBY: This event is huge!  The number of things that can go wrong is a combinatorial function.

SCHLOCK: I don't think Petey allows combinatorials at these functions.

ENNESBY: It's Murphy's Law of Weddings, Sergeant.  "Anything that can go wrong will go wrong as close to the nuptials as possible."

The food, the music, the lighting, the clothing, the guests...

ENNESBY: Even discounting enemy action, this place is a giant Murphy bomb, and we're at ground zero.

SCHLOCK: So why isn't anybody else scared?

PETEY: I'm troubleshooting on the fly.  Minor problems have arisen, but they have been addressed.  Nobody will notice anything went wrong.

ENNESBY: The karmic debt we're accruing could destroy a planet.

SCHLOCK: Well, we're in a flying city so that's somebody else's problem.