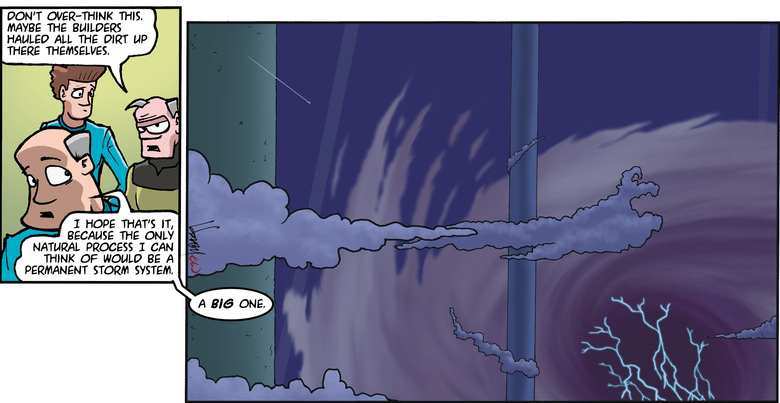 BARRY: I've run simulations on the reach of the high foliage, and this doesn't add up.

The sculpted PTU surfaces here provide zero mineral content for the jungle.  Any soil must have been hauled up by the trees themselves, in generation after generation of growth, death, and rot.

But even assuming edge-case growth and rapid evolution, a forest that climbs three thousand kilometers into the air would take twenty million years to draw sufficient material that high, and that's almost twice the age of the structure.

HENRI: Maybe the trees don't need as much soil as you think.

BARRY: According to Ebby's samples, the jungle needs exactly as much soil as I plugged into the simulation.

HENRI: Maybe.  According to this reading, many of the clouds have a lot of suspended particulates in them.

BARRY: Chicken and egg, guys.  Those particulates might be blowing off the high-altitude forests.

GEN. TAGON: Don't over-think this.  Maybe the builders hauled all the dirt up there themselves.

BARRY: I hope that's it.  Because the only natural process I can think of would be a permanent storm system.