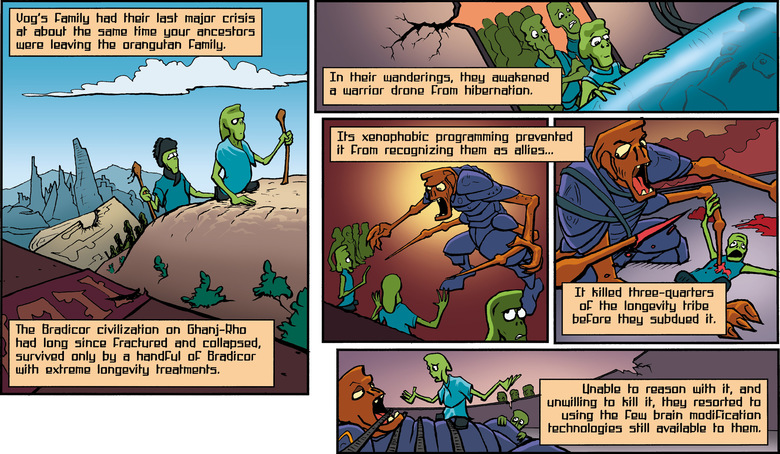 PETEY: *narrating* Vog's family had their last major crisis at about the same time your ancestors were leaving the orangutan family.

The Bradicor civilization on Ghanj-Rho had long since fractured and collapsed, survived by only a handful of Bradicor with extreme longevity treatments.

In their wanderings, they awakened a warrior drone from hibernation.

Its xenophobic programming prevented it from recognizing them as allies.

It killed three-quarters of the longevity tribe before they subdued it.

Unable to reason with it, and unwilling to kill it, they resorted to using the few brain modification technologies still available to them.

They disconnected the brain, and surrounded that structure with brain matter they contributed.

The amalgam that awoke was the "Vog" you used to know.

Over time his war-adapted features were reabsorbed, or simply amputated.

BUNNI: That's not really different from killing him.

PETEY: Correct. They knew this, and in order to live with their actions, all but one of these Bradicor deleted their memories of what they'd done.

The sole mementor kept the memory repressed, cordoned off from the rest of his brain.

PETEY: How many different ways could you get rich by abusing that power?

PETEY: You could, once I show you how to re-compile your brain.