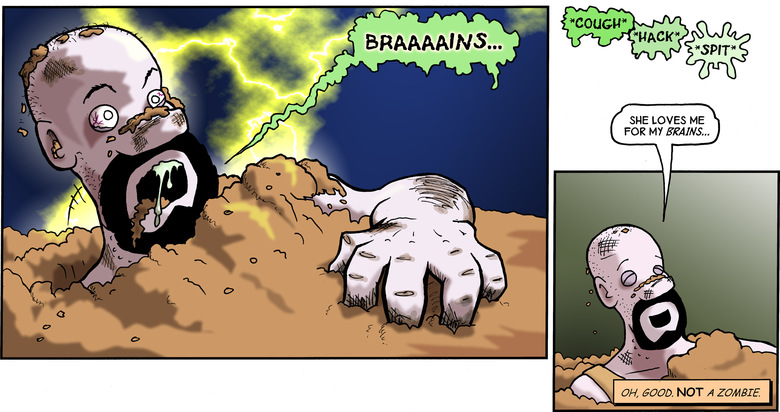 Narrator: Commander Kevyn Andreyasn is enjoying a very happy memory right now. . .
Elf: Mmmm. . . And wow. Is it possible that intelligence is an aphrodisiac?
Narrator: But the nano-machines keeping his brain alive have done all they can for now. It is time for him to get up.
Kevyn: I hope so. I'd hate to think it was the prawns we shared.
Narrator: "Up" is tough to get, death still has a grip on much of Kevyn's body, and he is buried under a meter of soft dirt.
Narrator: Kevyn's abnormal blood-nannies defended sapience and sentience as best they could, but their work was imperfect. His heart begins to beat, pushing the last of the extracted oxygen to extremities now being jump-started with the metabolic equivalent of rocket fuel. His mind is flooded with the exotic compounds. His identity fully consumed by a crushing, chemical panic.
Narrator: Swept away on a tide of synthetic hormones, starving for a breath, confused and terrified, Kevyn's fractured consciousness embraces a single thought.
Kevyn: B R A A A A I N S . . .
Kevyn: *COUGH* *HACK* *SPIT*
Kevyn: She loves me for my brains. . .