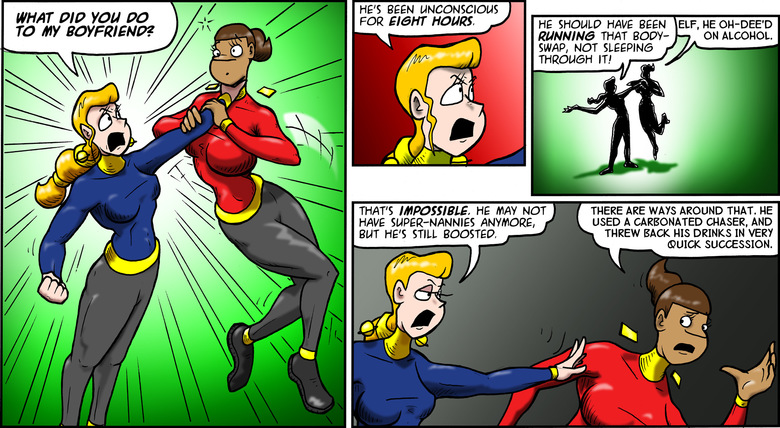 Narrator: Medibay Two, aboard the Touch-And-Go. . .
Elf: Doc, can I have a word with you?
Doctor Bunnigus: Can it wait? We just teraported the real dead-Xinchub, and I need to make sure these seals are nice and hermetic.
Elf: Actually, no. It can't wait.
Elf: WHAT DID YOU DO TO MY BOYFRIEND?
Elf: He's been unconscious for eight hours.
Elf: He should have been running that body-swap, not sleeping through it!
Doctor Bunnigus: Elf, he oh-dee'd on alcohol.
Elf: That's impossible. He may not have super-nannies anymore, but he's still boosted.
Doctor Bunnigus: There are ways around that. He used a carbonated chaser, and threw back his drinks in very quick succession.
Doctor Bunnigus: I administered 25ccs of Sober-Somn, enabling him to sleep off his binge with no ill effects.
Elf: So you did drug him!
Doctor Bunnigus: Yes, I did. And in about fifteen minutes he will awaken fresh and invigorated, but with very little memory of last night.
Doctor Bunnigus: If you're dressed appropriately at his side, he will probably be very "glad to see you," if you know what I mean.
SFX: ZZZIP!
Doctor Bunnigus: Angry to amorous in ten seconds flat. I should be a therapist.