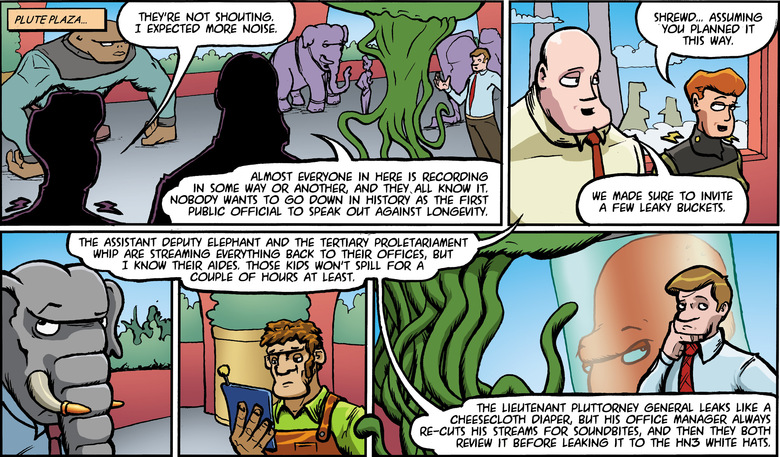 MURTAUGH: They're not shouting.  I expected more noise.

HABAN: Almost everyone in here is recording in some way or another, and they all know it.  Nobody wants to go down in history as the first public official to speak out against longevity.

MURTAUGH: Shrewd... assuming you planned it this way.

HABAN: We made sure to invite a few leaky buckets.

The Assistant Deputy Elephant and the Tertiary Proletariament Whip are streaming everything back to their offices, but I know their aides.  Those kids won't spill for a couple of hours at least.

The Lieutenant Pluttorney General leaks like a cheesecloth diaper, but his office manager always re-cuts his streams for soundbites, and then they both review it before leaking it to the HN3 white hats.

MURTAUGH: So... how long before we're all on the news?

They both called Enquiropedia Atlantica.  They're racing.

MURTAUGH: You made sure this information wants to be free.

HABAN: Free to rush into the indiscreet, outstretched arms of the Fourth Estate.