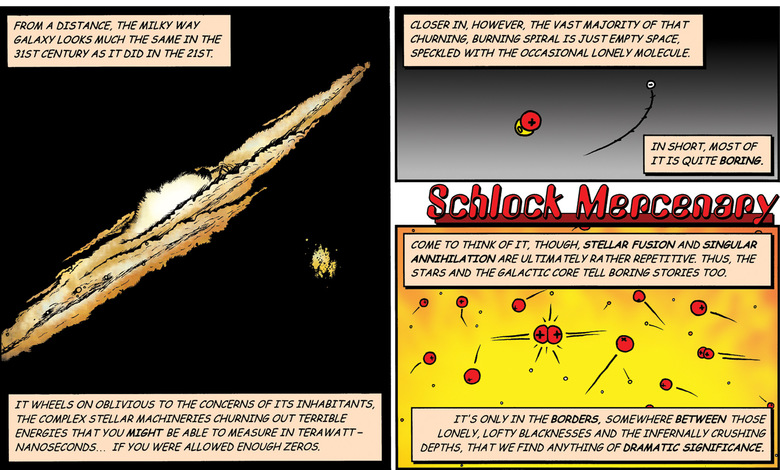 Narrator: From a distance, the milky way galaxy looks much the same in the 31st century as it did in the 21st.It wheels on oblivious to the concerns of its inhabitants, the complex stellar machineries churning out terrible energies that you might be able to measure in terawatt-nanoseconds... If you were allowed enough zeros.
Narrator: Closer in, however, the vast majority of that churning, burning spiral is just empty space, speckled with the occasional lonely molecule.In short, most of it is quite boring.
Narrator: Come to think of it, though, stellar fusion and singular annihilation are ultimately rather repetitive. Thus, the stars and the galactic core tell boring stories too.It's only in the borders, somewhere between those lonely, lofty blacknesses and the infernally crushing depths, that we find anything of dramatic significance.
Narrator: You asked for drama? Here fly fleets of giant warships, who are in their own turn wielding and unleashing terrible energies as the first pan-galactic conflict in that interracial memory known as 'Recorded history' unfolds in all its bloody, blistering, majesty.History, even in the making, is fairly dull. It lacks personality. War and peace... We all know it repeats itself.
Narrator: You want drama? In the inhabited border-lands between the stars and the nothingness, in the turbulent interstitials between the war and the peace we find enormous potential energy. It is within these turbulent fringes, these borders within the borders, that life gets exciting, and we begin our story:
Sign: Kara-kul
Narrator: Welcome to Sol system, where, aboard a small mercenary ship, money has been accepted for betrayal, treason will be repaid with treachery, and resistance shall be met with irresistable force.
Schlock: The infomercial channel is running repeats again.
Ennesby: Oooh, I love this one. Makes me wish I had feet that could get smelly.
Narrator: Of course, nothing's happening yet.