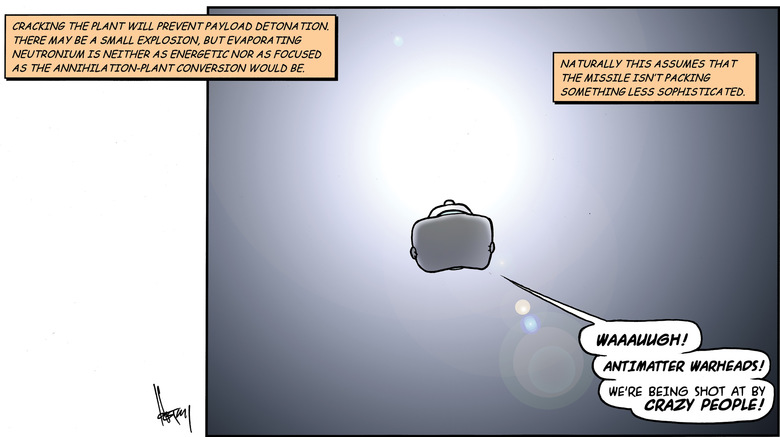 Narrator: Splattering an inbound missile is usually not a big deal. A stream of accelerated particles will suffice.
Narrator: The Tough's outriding tanks have heavy particle cannons for just this sort of work.
Brad: Take numbers six through eleven, 'Chelle. I'll sweep one through five.
Narrator: Aiming is tricky, since velocities are significant fractions of cee, but a good firing computer can make the shot.
'Chelle: Confirmed. I've got a firing solution. Beams away.
Narrator: The target, a two-meter long breacher missile has a small annie-plant typically providing both propulsion and payload.
Narrator: Cracking the plant will prevent payload detonation. There may be a small explosion but evaporating neutronium is neither as energetic nor as focused as the annihilation-plant conversion would be.
Narrator: Naturally this assumes that the missile isn't packing something less sophisticated.
'Chelle: WAAUUGH! Antimatter warheads! We're being shot at by CRAZY PEOPLE!