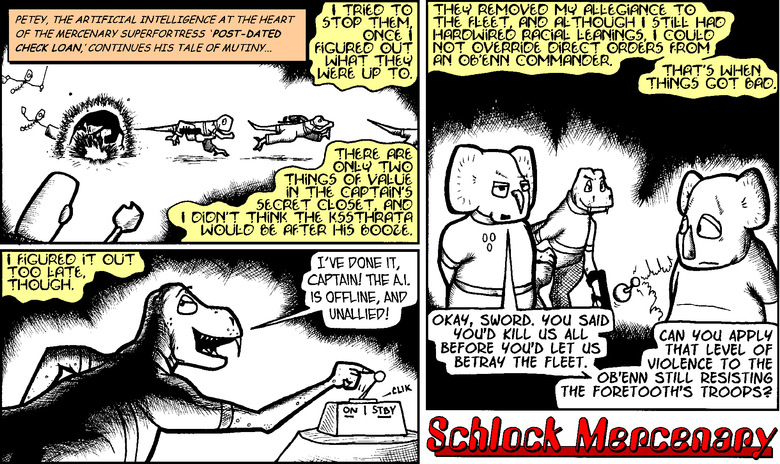 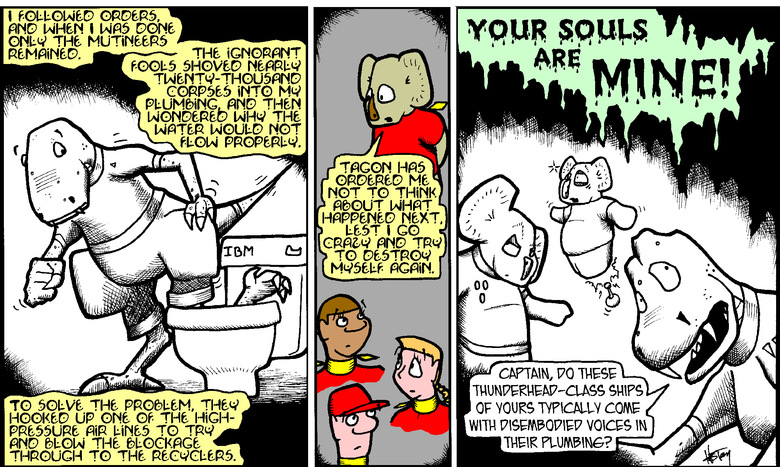 Narrator: Petey, the artificial intelligence at the heart of the mercenary superfortress 'post-dated check loan' continues his tale of mutiny...
Petey: I tried to stop them once I figured out what they were up to.
Petey: There are only two things of value in the captain's secret closet, and I didn't think the Kssthrata would be after his booze.
Petey: I figured it out too late, though.
Kssthrata Foretooth: I've done it, captain! The A.I. is offline, and unallied!
SFX: (switch going on standby) Clik
Sign: On | stby
Petey: They removed my allegiance to the fleet, and although i still had hardwired racial leanings, i could not override direct orders from an ob'enn commander. That's when things got bad.
Ghen: Okay, sword. You said you'd kill us all before you'd let us betray the fleet. Can you apply that level of violence to the ob'enn still resisting the foretooth's troops?
Petey: I followed orders, and when I was done only the mutineers remained. The ignorant fools shoved nearly twenty-thousand corpses into my plumbing, and then wondered why the water would not flow properly.
Petey: To solve the problem, they hooked up one of the high-pressure air lines to try and blow the blockage through to the recyclers.
Sign: IBM
Petey: Tagon has ordered me not to think about what happened next, lest I go crazy and try to destroy myself again.
Plumbing Ghost: Your souls are mine!
Kssthrata Foretooth: Captain, do these thunderhead-class ships of yours typically come with disembodied voices in their plumbing?
Elf:
Der Trihs:
Bunni:
Kssthrata soldiers: