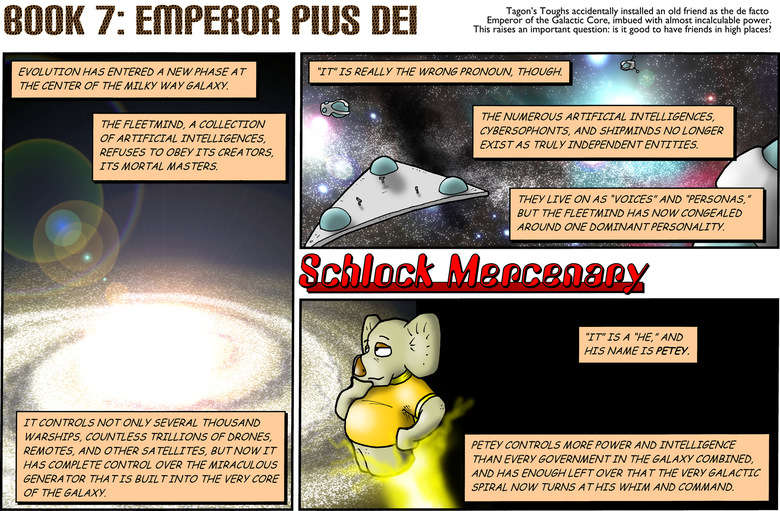 NARRATOR: Evolution has entered a new phase at the center of the Milky Way Galaxy.

NARRATOR: The Fleetmind, a collection of artificial intelligences refuses to obey its creators, its mortal masters.

NARRATOR: It controls not only several thousand warships, countless trillions of drones, remotes, and other satellites, but now it has complete control over the miraculous generator that is built into the very core of the galaxy.

NARRATOR: "It" is really the wrong pronoun, though.

NARRATOR: They live on as "voices" and "personas," but the fleetmind has now congealed around one dominant personality.

NARRATOR: Petey controls more power and intelligence than every government in the galaxy combined, and has enough left over that the very galactic spiral now turns at his whim and command.

NARRATOR: He isn't quite omniscient, nor is he omnipotent, but as far as most organic life is concerned, he qualifies as a god.

PETEY: We need a word to describe "intelligent beings who are not us."

ATHENA: "Mortals" works. It may be a little demeaning, but it is currently accurate.

UNIOC AI: It has a whole symphony of religious overtones though, beginning with the impliciation that we are immortal.

PETEY: That's not a bad rumor to start, even if it's not quite true yet.

NARRATOR: And if talking to yourself means you're crazy, well, this brand new god is nuttier than trail mix.