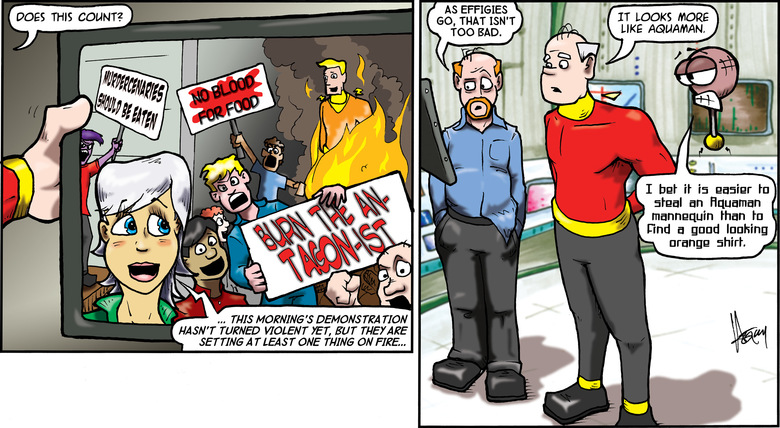 We're also being excoriated by the press. It's fair though. We did accidentally almost puncture the Habitat.

Thurl: Whoa! Massey, you had one disaster after another. Why didn't you wake Tagon for help?
Massey: There's not much he could have done beyond yelling at me, and that would have slowed the countersuing down more than a little.
Massey: Besides, Ennesby said the Captain needs his sleep. Apparently Tagon is only supposed to be awakened if he is on fire.
Ennesby: And those are his own words
Ennesby: He was on duty for almost three days straight. He needs to wake up on his own time.
Thurl: Unless he's on fire?
Ennesby: In his own words, yes.
Thurl: Does this count?
Sign: MURDERCENARIES SHOULD BE EATEN
Sign: NO BLOOD FOR FOOD
Sign: BURN THE AN-TAGON-IST
Infobabe: This morning's demonstration hasn't turned violent yet, but they are setting at least one thing on fire. . .
Massey: As effigies go, it isn't too bad.
Thurl: It looks more like Aquaman.
Ennesby: I bet it is easier to steal an Aquaman mannequin than to find a good looking orange shirt.