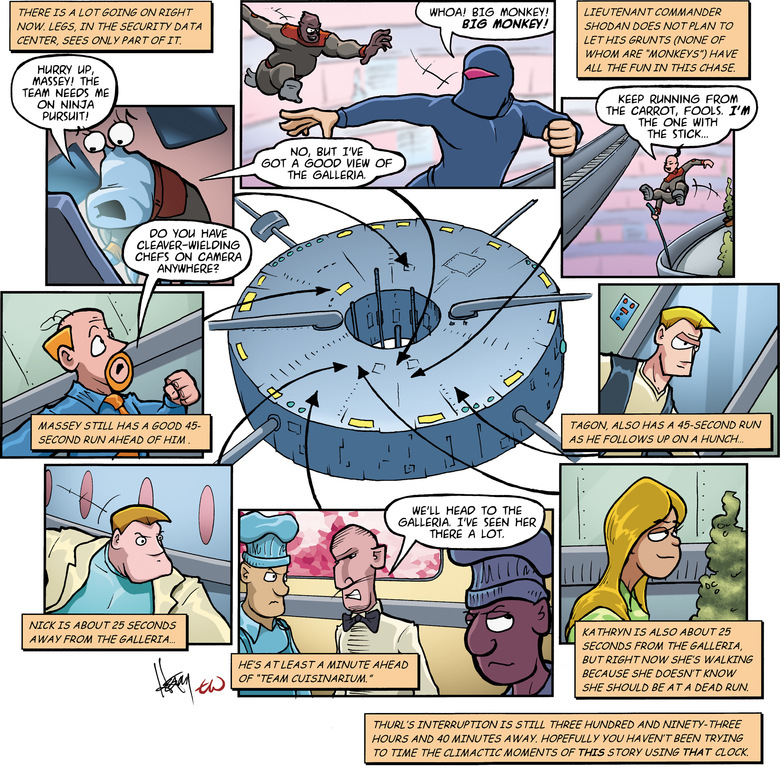 NARRATOR: There is a lot going on right now.  Legs, in the Security Data Center, sees only part of it.

LEGS: Hurry up, Massey!  The team needs me on ninja pursuit!

MASSEY: Do you have cleaver-wielding chefs on camera anywhere?

LEGS: No, but I've got a good view of the Galleria.

NARRATOR: Lieutenant Commander Shodan does not plan to let his grunts (none of whom are "monkeys") have all the fun in this chase.

SHODAN: Keep running from the carrot, fools.  I'm the one with the stick...

NARRATOR: Massey still has a good 45-second run ahead of him.

NARRATOR: Tagon, also has a 45-second run as he follows up on a hunch...

NARRATOR: Nick is about 25 seconds away from the Galleria...

WAITER: We'll head to the Galleria.  I've seen her there a lot.

NARRATOR: He's at least a minute ahead of "Team Cuisinarium."

NARRATOR: Kathryn is also about 25 seconds from the Galleria, but right now she's walking because she doesn't know she should be at a dead run.

NARRATOR: Thurl's interruption is still three hundred and ninety-three hours and 40 minutes away.  Hopefully, you haven't been trying to time the climactic moments of this story using that clock.